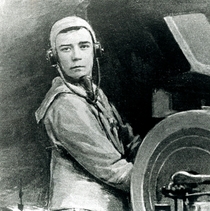 Sailor. Born as John Travers Cornwell in Clyde Place, Leyton, he enlisted in the Royal Navy at the age of 15.

Killed at the Battle of Jutland, aged 16. He was serving on H.M.S. Chester during the Battle of Jutland. Apart from himself, all of the gunners had either been killed or mortally wounded. He remained at his post in spite of being seriously wounded, and was transferred to Grimsby General Hospital, where he later died.

He was posthumously awarded the Victoria Cross three months later. He has become known as the youngest recipient of the V.C., when in fact he was actually third in line for the distinction, following Andrew Fitzgibbon and Thomas Flinn (or Flynn) who were both fifteen. According to the IWM a photograph, supposedly of him, has been used extensively (even appearing on a postage stamp), but is now thought to be that of his brother George. Another brother, Ernest, was the model for this other picture that we've found, by the artist Frank O. Salisbury.

From Scouts Heritage: "On the 31 May 1916 the actions of an ordinary boy in extraordinary circumstances led to the development of Scouting’s Cornwell Badge. This badge is still awarded by The Scout Association to honour those Scouts under 25 years of age who demonstrate a pre-eminently high character and devotion to duty, together with great courage and endurance."

We thank Jamie Davis for finding this link to the British Pathe news film of the unveiling, by MP Dr MacNamara, of Cornwell's grave monument on 31 December 1920 at Manor Park Cemetery.

2016: An article in the Guardian referred to Cornwell's heroism and prompted correspondence on the letters page pointing out that there is no evidence and that the government used the incident for propaganda.

This section lists the memorials where the subject on this page is commemorated:
Jack Cornwell VC

We first took a photograph of this plaque some time ago, before it was stolen...

Infantry regiment. It was founded to oppose King James II and the forthcoming...