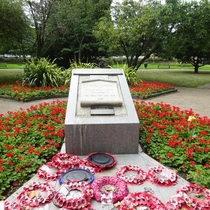 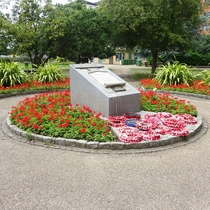 {Top plaque on the face of the memorial, by the crest of Leyton Orient Football Club:}
Remembering the forty one players and staff of Clapton Orient Football Club who served with the 17th Bn Middlesex Regiment (The Footballers' Battalion) during the great war of whom three players gave their lives in the Battle of the Somme.
Private William Jonas F/32 27th July 1916
Pte George Scott F/1583 16th August 1916
CSM Richard McFadden MM F/162 23rd October 1916.

{Third plaque on the face of the memorial:}
In grateful remembrance of all those people of Leyton who suffered in the world war 1939 - 1945.

{Bottom plaque on the face of the memorial:}
In memory of the fallen of Leyton 1945 to present day
Lest we forget.

{Plaque on the ground in front of the memorial, beneath an image of a Victoria Cross medal:}
Boy First Class John Cornwell
Royal Navy 31st May 1916.

When we visited the location, the Cornwell plaque was obscured by wreaths and soil, so we couldn't get a photograph. The inscription has been copied from this website.

This section lists the subjects commemorated on the memorial on this page:
Leyton war memorial

forty one players and staff of Clapton Orient Football Club served with the 1...

Originally formed by members of the Glyn Cricket Club. Playing under various ...

"Fallen" tends to suggest a war context, but this is not specified.

Leyton people who suffered in WW2