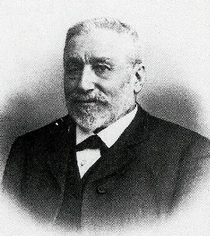 Engineer and builder. One of the early innovators with reinforced concrete initially in Brussels. In 1892, he patented a reinforced-concrete construction system. The first building erected using this system was the 1897 Weaver Building, in what was then the docks area of Swansea.

In 1898 he moved to Paris but by then he also had a rapidly expanding network of firms acting as agents for his system, including These included L.G. Mouchel and F.A. Macdonald & Partners in Britain so presumably these firms installed the Weaver building and the Kew footbridge.

This section lists the memorials where the subject on this page is commemorated:
François Hennebique

Opened in 1912, Kew Gardens station footbridge is an early and rare British e...

Architect and housing developer. He purchased twenty three acres at the foot ...

restoration of east wing of south front of Guildhall

Restored according to the original design and as built by George Dance RA in ...