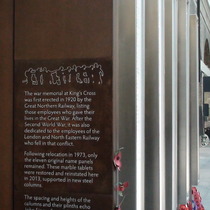 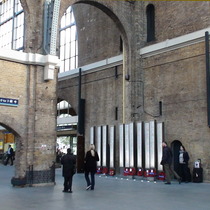 {On the left side of the rusty information panel:}
The war memorial at King’s Cross was first erected in 1920 by the Great Northern Railway, listing those employees who gave their lives in the Great War.  After the Second World War, it was also dedicated to the employees of the London and North Eastern Railway who fell in that conflict.

Following relocation in 1973, only the eleven original name panels remained.  These marble tablets were restored and reinstated here in 2013, supported in new steel columns.

The spacing and heights of the columns and their plinths echo John Singer Sargent’s 1919 painting Gassed, an outline of which is shown above.  This monumental canvas, part of the Imperial War Museum collection, depicts eleven soldiers guiding each other across a battlefield following a gas attack.

This memorial, standing at the end of the railway worked by the men named here, honours all who fought and fell in the two wars.

{On the right side of the rusty information panel:}
To the immortal memory of the men of the Great Northern Railway who gave their lives in the Great War.

1914-18
1939-45
{The two date ranges share their “19”.}
To the immortal memory of the men of the London and North Eastern Railway who gave their lives in the Second World War

The original memorial erected in 1920 by the Great Northern Railway Company thirty yards west of here was relocated in 1973 by the British Railways Board.  This new memorial incorporating the original name panels was erected here by Network Rail.

{The panels are the very ones that we previously transcribed so click here to see the list of names.}

We are not convinced that basing the design of this memorial on the painting Gassed is totally successful.  Compare this memorial with the two previous manifestations of these name panels: Original and Pre-renovations.  The new location is better than the other two but we think the traditional memorial designs work better than the new one, in which the panels appear flimsy and insubstantial, making the whole memorial less imposing than it should be.  That's our personal opinion, others may find the new design intriguing, even inspiring.

This section lists the subjects commemorated on the memorial on this page:
King's Cross war memorial - 3. post-renovations

This section lists the subjects who helped to create/erect the memorial on this page:
King's Cross war memorial - 3. post-renovations

The gun on top of the monument is a BL 9.2 inch Howitzer Mk I, carved in ston...