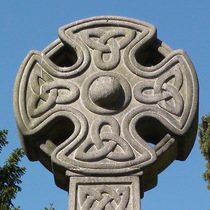 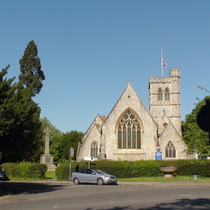 {Bronze plaque on the front of the plinth:}
1914 - 1918
Remember with thanksgiving the true and faithful men who in these years of war went forth from this place for God and the right. The names of those who returned not again are here inscribed to be honoured for evermore.

{Bronze plaque on the left of the plinth:}
The remaining 29 names of the list.

Prompted by Michael John we investigated this Celtic knot pattern. Any symbolism seems to be a matter of opinion but Gaelic matters says “… the three-lobed Triquetra or Trinity knot is the inter-connection of the three planes of existence: mind, body, and spirit.” To get a glorious screen-full of these lovely designs Google images “celtic knot patterns”. Similarly Google images with "celtic knot "war memorial"" and you see that this style of pattern was quite common for war memorials across Britain.

Designed by Henry Clutton (1814 - 1895) this church was built to replace its too small 1632 predecessor. On its completion in 1850 the demolition began of the old church, situated immediately to the east. But there was an outcry against this destruction and the building was left standing, but roofless and unmaintained. In 1989 - 92 it was taken in hand and stabilised. It is now a picturesque ruin which can be visited on certain days.

Perhaps we missed it but we found no plaque or information about the large dish on the grass verge in front of the church, that you can see in our photo. At Visit Stanmore we learn that it is "the stone bowl of a drinking fountain donated to the people of Stanmore by Agnes Keyser". They have a WW1 photo of it "in its original setting, positioned on Stanmore Hill at the junction with Green Lane" and there you see that it originally had "a large ornate central lamp on a column,the lower part contained a water trough as well as the fountain".

This section lists the subjects commemorated on the memorial on this page:
Stanmore war memorial