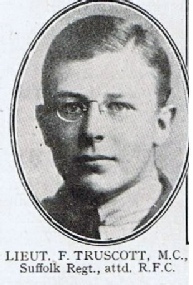 Andrew Behan has kindly provided this research: Lieutenant Francis George Truscott M.C., was born on 12 August 1894 in Redhill, Surrey. He was the elder son and the third of the four children of Sir George Wyatt Truscott, and Lady Truscott née Jessie Guthrie Stanham (1854-1921). Cousin to Cyril Truscott who also appears on the Stationers' War Memorial.

The 1911 census shows him as a scholar at Rugby School, Warwickshire, boarding at Hillmorton Road, Rugby. He went on to Trinity College, Cambridge where he qualified for his Bachelor of Arts and also represented his college in rowing at Henley in 1913.

At the outbreak of World War One, and while in residence at the university, he immediately sought a commission as a 2nd Lieutenant in the Suffolk Cyclists Corps (London Divisional Cyclist Companies, Divisional Mounted Troops, Territorial Force). He joined the 6th Battalion, Suffolk Regiment as a Second Lieutenant and entered France on 31 July 1915 where he was twice mentioned in dispatches, one of them for bravery at the Batlle of Loos, France, in November 1915. On 7 December 1915 he was admitted by patrimony as Freeman in the City of London in the Worshipful Company of Stationers. In January 1916 he was awarded the Military Cross.

He transferred to the Royal Flying Corps in January 1917 as a Lieutenant and served as an observer in 45 Squadron where he was credited with being instrumental in destroying two German planes. On 6th April 1917 at 9.10am he and his pilot Lieutenant J. A. Marshall took off on a routine reconnaissance patrol in a Sopwith Strutter (A1093) aeroplane, along with other members of their squadron. He was shot down by Leutnant Joachim von Bertrab of Jagdstaffel 30 at 10.43am. Two other aeroplanes belonging to 45 Squadron were shot down within minutes of this. Marshall was killed outright (he was only aged 19 years) but Francis Truscott died of his wounds later that day, aged 22 years. Both badly burned bodies were buried in Row A, Graves 29 and 30, in Ramegnies Churchyard, Ramegnies-Chin, Tournai, Belgium. Following the end of World War One, the Imperial War Graves Commission (now the Commonwealth War Graves Commission) exhumed their bodies from this small, isolated cemetery and reburied him in Plot 2, Row J, Grave 29 in the Tournai Communal Cemetery Allied Extension Cemetery, Hainaut, Belgium.

Administration of his estate was granted to his father on 9 February 1918 and his effects totalled £730-12s-4d. His father was also sent his army effects totalling £137-5s-5d on 23 February 1918. He was posthumously awarded The 1914-1915 Star, The British War Medal 1914-1918 and The Victory Medal. He is also commemorated on the east wall of the south transept of the Rugby School Memorial Chapel and on the War Memorial in the village of Ashurst Wood, two miles south of East Grinstead. His father was the chairman of the war memorial committee in the village, and he unveiled the memorial in August 1921.

More information at Friends of Hastings Cemetery and at Rugby Scholars.

This section lists the memorials where the subject on this page is commemorated:
Francis G. Truscott

The Drapers' Company has owned the site since 1543. The first building was de...

Established by an Order of the Court at Aldermen on 22 September 1569, a Roya...

The first Glaziers Hall was in Fye Foot Lane and lost in the Great Fire. Fye ...