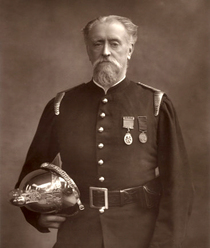 Soldier and fire brigade chief. Probably born at Glenmore Cottage, Ballymore, Ireland. After a short military career, he was appointed Chief Constable of Belfast, being responsible for both the police and the fire brigade. In 1861 following the death of James Braidwood in the Tooley Street fire, he was engaged as head of the London Fire Engine Department. Knighted on his last day of service.

He was immortalised in Gilbert and Sullivan's 'Iolanthe' in which the Fairy Queen sings "Oh Captain Shaw, type of true love kept under, could thy brigade with cold cascade quench my great love I wonder?". By a happy chance, Shaw was sitting in the middle of the stalls on the opening night of the operetta. Died at the Grand Hotel, Folkestone.

This section lists the memorials where the subject on this page is commemorated:
Eyre Massey Shaw