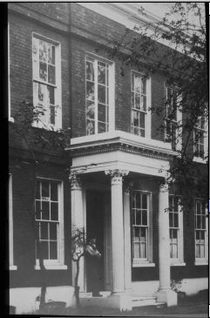 In 1891 C. R. Ashbee moved the workshops of the Guild of Handicraft from 34 Commercial Street to Essex House, at 401 Mile End Road, an early eighteenth-century mansion. The guild prospered at Essex House and by 1900 was employing about forty men. Heritage Images show a house which looks to be this one, captioned: Lady Essex's house, Mile End Road, Stepney, c1800, possibly Essex House, no 401 Mile End Road.

Manchester History relates that Essex House was "demolished in 1937 to make was for an art deco Odeon Cinema that opened on the 17th of October 1938. The cinema survived the war and, although changing function later in its life, occupied the site until April/May 1984 when it too was demolished." And the current building was erected.

This section lists the memorials where the subject on this page is commemorated:
Essex House - E3

Born as George Bryan Brummell in Westminster. A gambler and dandy and one of...

Clockmaker. From a family of clockmakers. Baptized in 1768 in Staffordshire...