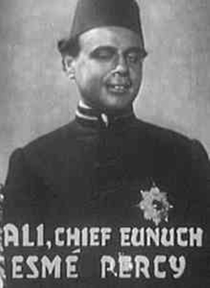 Esme Percy, once famous as a producer and star of stage and 50 films, but forgotten since his death in 1957.

Born London of French ancestry, as Saville Esmé Percy. A good looking stage star and theatre manager. He managed, in two separate incidences, to break his nose and lose an eye which by the 1930s reduced him to character roles in films. The IMDb has a short bio.

When on 4 December 1915 he enlisted in 3rd/14th (County of London) Battalion, The London Regiment (London Scottish), Service No.6038, he gave his home address as that of his father, Saville Percy, at 5a London Street, Hyde Park, West London. He was transferred to 2nd/14th (County of London) Battalion, The London Regiment (London Scottish) on 12 January 1916. Unfortunately, it was discovered that he was unable to see the target on miniature ranges, that his eyes watered excessively and that his eyesight was blurred in the open. He was diagnosed as suffering from extreme myopia that could not be improved by glasses and was discharged on 25 May 1916 under King's Regulations as 'not likely to become an efficient soldier on medical grounds'.

Electoral registers from 1924 show him living at 3c Warrington Crescent, Maida Vale, London, W9, initially with a Henrietta Percy (I am unsure whether this could have been his mother, a wife or a sister) until 1936. Thereafter he was the sole elector at this address, apart for the years 1951-1953 when there was a Sidney Martin Starkie also registered at this address.

Kelly's London Directories and General Post Office telephone directories also list him at this address and when probate was granted on 2 August 1957 the records confirm his home address remained as 3c Warrington Crescent, Maida Vale, but that he died, aged 69 years, on 17 June 1957 at 100 Marine Parade, Brighton, Sussex. His effects totalled £1,482-17s-6d.

This section lists the memorials where the subject on this page is commemorated:
Esme Percy