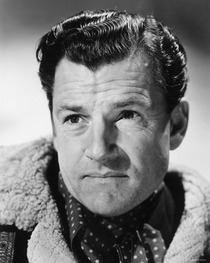 Actor. Born Kenneth Gilbert More at Raeden, Vicarage Way, Gerrards Cross, Buckinghamshire. Starred in many successful films of the 1950/60s, including 'Genevieve' and in heroic roles such as Douglas Bader in 'Reach for the Sky' and Charles Lightoller in 'A Night to Remember'. On television he appeared in the original version of The Forsyte Saga and in the Father Brown detective series. Died at his home, 27 Rumbold Road, Fulham.

This section lists the memorials where the subject on this page is commemorated:
Kenneth More