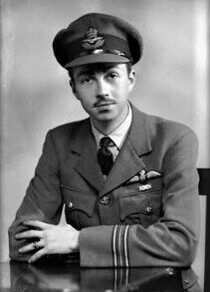 Lieutenant Colonel Gregory Augustus Daymond was born on 25 November 1920 in Great Falls, Cascade County, Montana, USA. From the American Air Museum in Britain website we learn that he grew up in New Beach, Orange County, California, and upon graduating from high school he worked in the motion picture industry in various positions. He took flying lessons on the side and qualified as a private pilot aged 16 years. When the war broke out in Europe he joined the Royal Air Force Volunteer Reserve, service number 84657, and went to an Operational Training Unit in England, and eventually was assigned as a Flying Officer to No.71 (Eagle) Squadron at RAF Kirton in Lindsey, Gainsborough, Lincolnshire.

He was sent to the USA in December on a lecture tour and returned to combat in June 1942. In August he was promoted to Squadron Leader of No.71 (Eagle) squadron and on 17 September 1942 he received a bar to his Distinguished Flying Cross, the citation for which read: 'Since being awarded the Distinguished Flying Cross this officer has completed many sorties over enemy territory. He has always led his flight with great skill and courage and has destroyed 7 enemy aircraft. In the recent Dieppe operations, Flight Lieutenant Daymond flew with distinction'. In September 1942 all three Eagle squadrons were transferred to the USAAF, where he received a commission as a Major and was appointed Commander of 4th Fighter Group, 334th Fighter Squadron based at RAF Debden, Saffron Walden, Essex

Eventually he was returned to the USA to develop a combat indoctrination programme for the USAAF. In November 1945 he left the service and and returned to the movie industry (though he does not manage an entry in the Internet Movie Database), becoming a Lieutenant Colonel in the USAAF Reserve. In addition to his British Distinguished Flying Cross and Bar he was awarded the American Campaign Medal, the European-African-Middle Eastern Campaign Medal and the World War II Victory Medal.

He obtained a degree in Physics from California Institute of Technology and entered the aerospace industry, leaving in 1957 to join Interstate Electronics Corporation, from which he retired in 1987.

He died, aged 76 years, on 16 December 1996 in Newport Beach, Orange County, California, USA and was cremated there.

This section lists the memorials where the subject on this page is commemorated:
Gregory Augustus Daymond

Chief of Staff, The Republic of Korea Army in 2014.