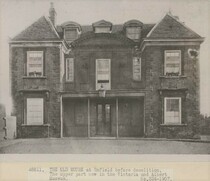 the V&A (our picture source) hold in their collection part of the façade of this building (not just the photo but the bricks themselves). Alamy have a photo of the saved section of the façade erected inside a building, presumably the V&A. The section is that of the central first floor including the segmental pediment.

The V&A write: "This brick house frontage was possibly built by or for Edward Helder, a bricklayer (d. 1672), after the designs of Sir Christopher Wren (1632-1723). It formed part of the school-house in which the poet John Keats received the greater of his education (about 1803-1810). At a later date {the plaque says 1849} the building became part of Enfield Railway Station. The station was demolished in 1872; the façade however was saved, and originally purchased for the Structural Collection of the Science Museum, then part of the South Kensington Museum."

Literary By-Paths in Old England by Henry C Shelley is quoted by Alamy, as follows:  "Cowden Clarke, the son of the master of the school, narrates that it had been built by a West India merchant in the latter end of the seventeenth or beginning of the eighteenth century. It was of the better character of the domestic architecture of that period, the whole front being of the purest red brick, wrought by means of moulds into rich designs of flowers and pomegranates, with heads of cherubim over niches in the centre of the building. Because it was such an excellent example of the early Georgian facade of Keats's Schoolhouse domestic architecture, and not because it formed part of the building in which Keats was educated, the façade of this Enfield schoolhouse escaped the usual fate of demolished bricks and mortar, and may now be seen in an annex of the South Kensington Museum, London..."

This section lists the memorials where the subject on this page is commemorated:
Enfield school-house / station

The house which stood on this site was built in the late 17th century. Later ...

According to Enfield Borough this plaque, together with the remaining plaque,...

Architectural practice of Kevin Carmody (from Melbourne) and Andrew Groarke (...