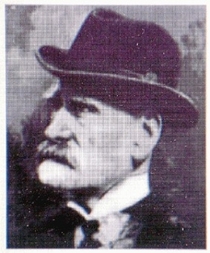 Born Hull and moved to Barnes in 1858.  Keen rower and footballer and for both sports he founded, played and officiated in clubs in the Barnes and Mortlake area. He proposed the founding of the Football Association and became its first secretary, drafting the Laws at home, 26, The Terrace, Barnes where he lived until the year of his death.  In his working life he was a solicitor.

26 November 2015: The Barnes house collapsed. The Evening Standard article claims there was a blue plaque on the house but we can find no other record of it ... except that, via Facebook, Jez Nicholson pointed us to The British Plaque Trust where a plaque for Morley on the Barnes house was nominated, possibly pre-2013.  To our knowledge the BPT have erected two London plaques, so perhaps one here will materialise eventually.

This section lists the memorials where the subject on this page is commemorated:
Ebenezer Cobb Morley

The Football Association was formed on the proposal of Ebenezer Cobb Morley a...

Cricketer. Born Edward Ingram in Dublin. Made his debut for the Ireland crick...