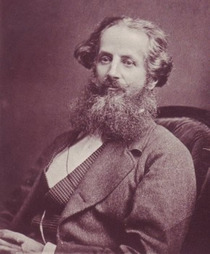 Born Egham, Surrey. Scholar and editor. He became honorary secretary of the philological society in 1853, where he laid the foundations for the Oxford English Dictionary. He founded a number of societies, most of which attracted criticism and controversy for their principles. A lifelong boating enthusiast, he founded the Hammersmith Sculling Club in 1896, which initially was intended for working-class girls. Died 3 St George’s Square, Primrose Hill.

This section lists the memorials created by the subject on this page:
Dr. Frederick James Furnivall

Chinese novelist and dramatist. Born Beijing as Shu Qingchun. Lao She was his...

Born as Charlotte Eliza Lawson Cowan in Ireland.  Moved to London in 1855.  M...