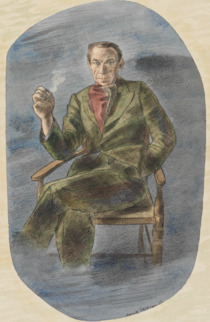 Artist, writer, broadcaster and art critic. He produced several books in addition to his newspaper and radio work. His radio broadcasts made him well known to the British public in the 1930s. Art critic for the Sunday Times and then the Guardian. Lecturer on art history at the Central School of Arts and Crafts from 1963.

Born as Eric Newton Oppenheimer on 28 April 1893 and raised in Manchester he went to Manchester University. His parents were Lehmann James Oppenheimer (1867-1916) and Edith Oppenheimer née Newton (1867-1948). He was their elder child, his sister being Ethel Oppenheimer (1899-1979). He served in WW1 initially as a Second Lieutenant in the 2nd/9th Battalion, The Manchester Regiment, entering France on 11 February 1917. On 3 June 1918 he anglicised his name by deed poll, dropping the Oppenheimer. He ended his service in the army with the rank of A/Captain and was awarded both the British War Medal 1914-1918 and the Victory Medal.

His grandfather (b.1830 Brunswick, Germany. d. 1900)) founded Ludwig Oppenheimer Ltd, a mosaic firm based in Old Trafford, where his father worked and where he worked as a designer and craftsman, 1913-14 and 1918-33, WW1 explaining the gap. The mosaics were mostly on a religious theme and are still to be seen in several churches in Britain and Ireland. He took part in the Paris exhibition in 1925. He left the family firm but continued to create mosaics for much of his life, those in the side chapels of Sacred Heart Church Sheffield being installed in 1961. The Courtauld Institute of Art holds many designs of Newton Mosaics and theatre set designs in its Stella Newton Archive. The firm operated until 1965.

His first marriage was to Isabel Aileen Vinicombe (1893-1985) on 29 November 1915 at St James's Church, Danes Road, Birch in Rusholme, Manchester. The marriage register showed him to be a Commissioned Officer residing at 8 Manley Road, Whalley Range, Manchester, whilst her address was 9 Park Range, Victoria Park, Manchester. They had one son, Ian Vinicombe Newton (1916-1997). Their marriage ended in divorce in 1934 and in the 1st quarter of that year his marriage to Stella Mary Pearce was recorded in the Holborn registration district. The 1939 England and Wales Register shows him and his wife at 20 Wilmington Square, Finsbury and that telephone directories from 1948 show him listed at 3 Cumberland Gardens, London, WC1.

He died, aged 71 years, on 10 March 1965 in his London office (of the Manchester Guardian) according to Wikipedia, but our colleague Andrew Behan reports that probate records show that he died at St Bartholomew's Hospital, London, EC1 and that when administration (with a will) was granted to his widow on 10 August 1965 his effects totalled £10,583. He was buried on 13 March 1965 in the London Borough of Camden.

The 1943 portrait of Newton is by Barnett Freedman.

We can recommend three sites for further reading: Tilesoc which gives more details about the Oppenheimer family and has photos of many of the mosaics, none, as far as we can see, in London. Also British Jews in the First World War has some very interesting information, including the letter sent by the firm in 1914 to their customers explaining that, despite its name, the firm was "entirely British".

Costume Consultant holds "Eric & Stella Newton - impressions by his grand-daughter Josephine Hammond. July 2005".This gives fascinating information about the house and how it was decorated and furnished. Hammond also writes "1987 ... Stella confided how Eric had been constantly unfaithful to her, how he’d forbidden her to have children ..."

This section lists the memorials where the subject on this page is commemorated:
Eric Newton

This section lists the memorials created by the subject on this page:
Eric Newton

Designer. Born Abraham Gamse in Whitechapel. In World War II, he was approach...