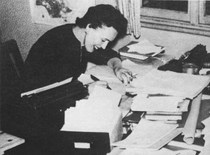 Novelist. Born as Barbara Mary Crampton Pym in Oswestry, Shropshire. Lived in London: 1938-9, 1945-74. WW2 served in the Women's Royal Naval Service. Worked at the International African Institute in London 1946-63 where she was assistant editor for the scholarly journal 'Africa'. Published 13 novels but from 1963 she struggled to get published, her style being mistakenly thought old-fashioned. Only when Lord David Cecil and Philip Larkin publicly lauded her work was it again published and its quality recognised.

Larkin: "I'd sooner read a new Barbara Pym than a new Jane Austen."

2019: We were surprised that Pym had not been honoured with a blue plaque so we wrote to English Heritage asking that she be considered and were told that is already underway with a decision in February.

This section lists the memorials where the subject on this page is commemorated:
Barbara Pym