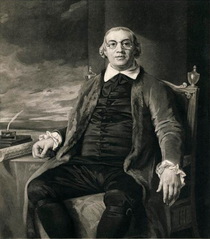 Politician and inventor of fireproofing systems. Born in Bath, he moved to London where he met and became close friends with Benjamin Franklin. As an MP, he represented Kingston-upon-Hull and became an opponent of the war with America, and the African slave trade. He devised a system of fire-proofing buildings by inserting metal plates between the floors. At one of his demonstrations, King George III and Queen Charlotte are said to have taken breakfast on the upper floor of his house while a fierce fire raged below! Died at his home in Belvedere, Lansdown, Bath.

The picture web site gives "David Hartley the Younger ... son of the philosopher David Hartley (1705-1757). The scene shows Hartley with the scroll (left) for the Treaty of Paris ... that ended the American Revolutionary War. Hartley was Minister Plenipotentiary, appointed by King George III to treat with the rebel colonies in North America that had declared independence in 1776 as the United States of America."

We've found some interesting stuff about Hartley at Boston 1775. For instance, he was thought a very dull speaker "... in Parliament, the intolerable length, when increased by the dullness of his Speeches, rendered him an absolute nuisance, even to his own friends. His rising always operated like a dinner bell. One day, that he had thus wearied out the patience of his audience; having nearly cleared a very full House, which was reduced from three hundred, to about eighty persons, half asleep....".

This section lists the memorials where the subject on this page is commemorated:
David Hartley