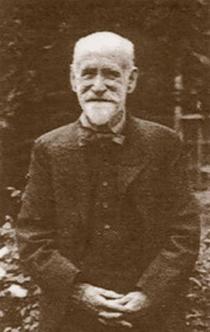 Designer and artist. Born Thomas Matthews Rooke. We can't find his precise dates so we don't know if he made his hundred - not common even now and a rare achievement in the 1940s.

From the Bedford Park panel: "Rooke was Edward Burne-Jones’s studio assistant for almost thirty years. He was also an interesting painter in his own right, producing imaginative and religious subjects in oils and watercolours, mostly of old buildings. He was deputed to Burne-Jones’s studio where he remained until the end of the master’s life. In 1878 Burne-Jones recommended him to John Ruskin, who was looking for artists to record old buildings threatened with demolition or restoration. Until 1893 Rooke spent half his time working for Ruskin. He died in his 100th year at his Bedford Park home, 7 Queen Anne’s Gardens."

This section lists the memorials where the subject on this page is commemorated:
T. M. Rooke