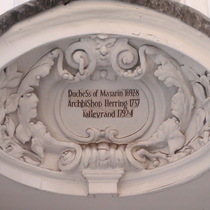 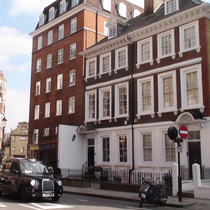 A delightful and unusual plaque in the cove of the lovely Georgian doorway. However its claim to housing celebrities is suspect. British History On-line reports "The Duchess, if she lived in the square, was probably at No. 15; Herring lived nearby in a house to the east; Talleyrand addressed a letter from Kensington Square in 1792 but it is not known from which house."

And RBKC reports that at the specified Talleyrand dates the house was occupied by a Frenchman so perhaps Talleyrand stayed with him; and regarding the Duchess there is complete consecutive evidence of her residence elsewhere.

Oh dear. Nowhere can we find any date for when this "plaque" was erected. The typeface, especially the "s"s look old but that can easily be faked.

Our attempts to confirm the occupancy dates on the plaque give mixed results:

Monstrous Regiment of Women has Mazarin/Mancini moving into Kensington Square in 1689 and in 1693 moved out to a house in Paradise Row in Chelsea, where she died.

In Archbishop Herring’s Visitation Returns 1743 we found that “from 1731 he seems to have divided his time between Blechingly and Rochester until 18 June 1737 when he was nominated to the see of Bangor” and on 14 January 1738 was “consecrated in the Chapel of Lambeth Palace”. This certainly puts him on London at about the right date. Also British History On-line reports that Herring was a tenant in this house in 1743 but was actually occupying another house nearby.

Talleyrand was backwards and forwards between Paris and London in the years given.

Although this house looks to be in Thackeray Street we believe its address is actually Kensington Square. This pair of houses was built sometime 1693 - 1702.

This section lists the subjects commemorated on the memorial on this page:
Mazarin, Herring & Talleyrand

Born Rome, niece of Cardinal Mazarin. She and her siblings were taken to live...

Born in Paris. During political upheavals in France he was backwards and forw...

The houses on this side of the street were built by Jeffrey Morgan of this pa...

Site of the King's Wardrobe, destroyed in the Great Fire, 1666. The Corporati...