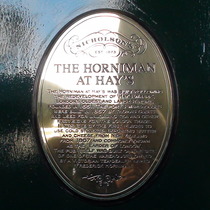 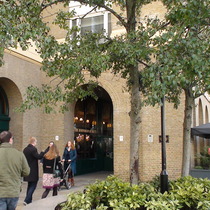 Nicholson's Est. 1873
The Horniman at Hay's was built following the redevelopment of 'Hay's Wharf', London's oldest and largest port, founded in 1651. the port's warehouses were built in 1857 by Thomas Cubitt and used for unloading tea and other provisions for the London trade. It was one of the first places to use cold storage, importing butter and cheese from New Zealand from 1867 and commonly known as the 'Larder of London'. The pub itself was built on the site of one of the warehouses owned by a Victorian tea-dealer named Frederick Horniman.

The plaque is incorrect in giving Thomas Cubitt as the designer. It was in fact the, unrelated, Sir William Cubitt.

In our photo the plaque is in the dark arcade.

This section lists the subjects commemorated on the memorial on this page:
Horniman at Hay's

This section lists the subjects who helped to create/erect the memorial on this page:
Horniman at Hay's

We'd hoped to find more information about the early buildings, perhaps a pict...

SH Within these precincts stood the Palace of Savoy, the erection of which wa...

The Biblical quotation at the end of the inscription is from 1 John 3:16. Th...