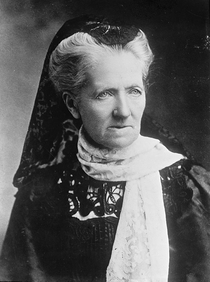 Anglo-Irish suffragist, socialist, pacifist, Sinn Féin activist, and novelist. She was a founding member of the Women's Freedom League, Women's Peace Crusade, and the Irish Women's Franchise League, and an activist in a wide range of political organizations over the course of her life, including among others the Women's Social and Political Union, Humanitarian League, Labour Party, The Irishwomen's Council, and the Communist Party of Great Britain.

Born to an Irish Navy captain as Charlotte French and was brought up partly in Edinburgh. Her brother was Sir John French. 1870, she married businessman Maximilian Carden Despard (d.1890). Died at her home near Belfast.

From Jeanne Rathbone: "Charlotte Despard 1944-1939 led a fascinating life that can be divided into stages. There was her Battersea socialist-activist phase which coincided with her suffragette era and overlapped with her Irish independence phase. Her final phase was when she relocated Belfast. Her ascetic vegetarian outlook, her anti-vivisection campaigning, her ant-fascist activism, her confused  ‘spiritual’ side from  Church of England protestant, converting to Catholicism and being active in the Theosophist movement overlapped with all of these."

This section lists the memorials where the subject on this page is commemorated:
Charlotte Despard

Established in the disused St Giles workhouse buildings during WW1 under the ...

Born Caroline Anne, daughter of Richard Martineau, a director and partner of ...