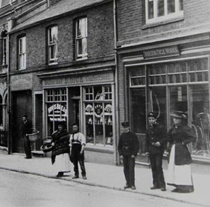 The inhabitants of Charlton

Charlton is an area of South-East London which still retains the feel of a village. Daniel Defoe described it as: 'A village famous, or rather infamous for the yearly collected rabble of mad-people, at Horn-Fair; the rudeness of which I cannot but think, is such as ought to be suppressed, and indeed in a civiliz'd well govern'd nation, it may well be said to be unsufferable'.
Our photograph of people outside the village cycle shop is undated, but the costumes appear to be late 19th or early 20th century.

This section lists the memorials created by the subject on this page:
The inhabitants of Charlton

Cycling activist. He was known for supporting community and environmental pro...

In the 19th century Swan Wharf was the site of a brewery and public house 'Sw...