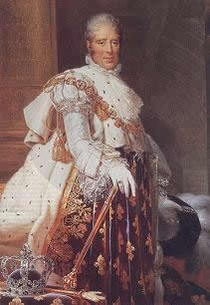 Last Bourbon King of France. Born Versailles. With the support of George III, he lived in Edinburgh and London to escape the revolutionary wars in France, 1792 - 1814. The monarchy was restored in France after Napoleon's defeat at Waterloo in 1815. Charles X succeeded in 1824 but was ultra-royalist and attempted to reduce the electorate. The people rioted and Charles escaped, leaving distant Bourbon cousin, Louis Philippe, as king. Charles ran back to England but was made much less welcome this time. He went back to Edinburgh and then knocked around Europe until he died in Gorizia, now in Italy.

This section lists the memorials where the subject on this page is commemorated:
Charles X of France