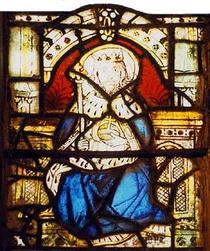 King of the Britons. Born Wales. Legend says that he built the first St Martin within Ludgate church, that his image was placed on the Lud Gate to frighten away the Saxons and that he was buried at St Martins Ludgate in 677. It seems that none of the stories bear historical scrutiny. King Cadwaladr (real) and King Lud (mythical) both supposedly had their image on the Ludgate and both are supposedly buried at St Martins. Seems likely their stories have got confused at some point.

Not to be confused with King Caedwalla of Wessex, with similar dates. Geoffrey of Monmouth confused them about 1,000 years ago and we've all been trying to get them straight ever since.

This section lists the memorials where the subject on this page is commemorated:
King Cadwaladr

Infanta of Spain, daughter of King Phillip III. She was considered as a possi...