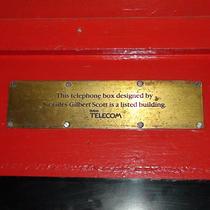 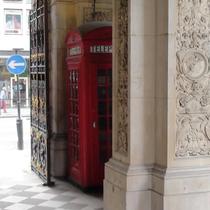 Two telephone boxes under the arch at the entrance to the courtyard. The box to the west (photographed) is the 1924 wooden prototype of Giles Gibert Scott's design which won the competition for a national standard design.  See Soane's Tomb for his inspiration (he was a trustee of the Soane Museum). From 1926 as Kiosk number 2, 1,500 cast-iron kiosks of this design were installed across London, one being the other box under this arch, on the other side of the driveway. However it proved expensive and Scott was asked to design K3 as a cheaper kiosk for the rest of the country. Only the best for London. Details from Heritage Elettra. Sadly, the actual phones in both these boxes are a more recent design.

This section lists the subjects commemorated on the memorial on this page:
First K2 telephone boxes

This section lists the subjects who helped to create/erect the memorial on this page:
First K2 telephone boxes

2022: Londonist have posted a very useful page on phone boxes.

Oh dear, get the wording wrong on a plaque and people are still sniggering ye...

{Top plaque:}This stone was laid by Mrs Onslow, for the glory of God and the ...

Unusually this memorial lists all the men who went to war, not just those who...