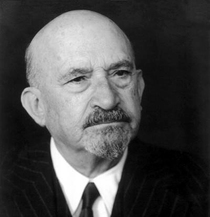 Scientist and statesman. Born Chaim Azriel Weizmann, at Motol, near Pinsk, Belorussia. (Modern day Belarus). He studied in Germany and Switzerland producing a number of patents on dyestuffs. In 1904 he moved to Manchester, believing that Britain could be influential in establishing a Jewish homeland in Palestine. His work here led to the discovery of a bacterium which converted carbohydrate into acetone and was crucial during WW1 in the production of cordite. Partly out of gratitude for this, the government agreed to the Balfour Declaration which led to the establishment of Israel. Already an important figure in the Zionist movement, he became Israel's first president in 1948. Died at his home Weizmann House, Rehovot, Israel.

This section lists the memorials where the subject on this page is commemorated:
Chaim Weizmann