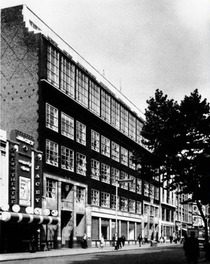 Our 1960 picture comes from Warsaw1948 which has a wonderful collection of old pictures of this area, many with current photos for comparison. There we also found this useful text:

"The cinema on the extreme left opened in 1911 as Pykes Cambridge Circus Cinematograph Theatre and went through several changes of ownership up until closure in 1987, including a period, from 1941 to 1947, when it was the Tatler, screening Russian films exclusively. There's more information and a marvellous set of photos here www.flickr.com/photos/oldcinemaphotos/sets/72157602984184... When this photo was taken, in the 1960's, the cinema operated as part of the Jacey News Theatre chain. News theatres were fairly common in the west end up until the 1960's and with their standard programme fare of cartoons, short films and newsreels lasting about one hour, many were located at, or near, main line stations. They were cheap and a good place to go if you had time to kill waiting for a train, or just wanted to get out of the rain.

In 1988 the famous Marquee Club moved here from their premises in Wardour Street and presented live bands until closure in 1995. There's more on this episode here www.themarqueeclub.net/history-charing-cross-1988-1990 The building was then converted into a public house and named The Moon Under Water, but a few years ago, it was renamed the Montagu Pyke, a nice touch and an acknowledgement of times past."

In 1915 an employee died in a fire in this cinema.

This section lists the memorials where the subject on this page is commemorated:
Cambridge Circus Cinematograph Theatre

The Montagu Pyke This is the site of the former 'Marquee Club' which closed i...