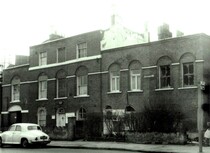 The house is said (Hackney Gazette) to have been named for Joseph Beck's grandfather. Grace's Guide suggests that Beck and his family moved here between 1881 and 1891.

At the time the house was number 97, but the site is now 233 Albion Road, and occupied mainly by a car park and a set-back, modern, low-rise health centre.

We were pleased to find the photo but we can find no details. The house was probably erected c. 1810-30. The car suggests to us that the photo dates from the 1960s, and the broken windows suggest that the photograph was taken because the building was about to be demolished.

This section lists the memorials where the subject on this page is commemorated:
Barton House, Stoke Newington

Capital city of India. It succeeded Calcutta as the capital of the country. T...

This BL plan of the parish of Wenlock Barn is from 1799.

A community-based social enterprise set up to develop the regeneration of the...