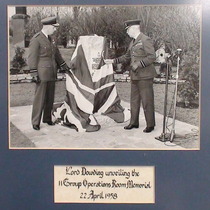 Air Chief Marshal Lord Dowding, GCB, GCVO, CMG, RAF, Baron of Bentley Priory in the county of Middlesex.
Commander-in-Chief Fighter Command Royal Air Force from its formation in 1936 until November 1940, he was thus responsible for the preparation for and the conduct of the Battle of Britain. He equipped the command with the Hurricane and the Spitfire. He was among the first to appreciate the vital importance of R.D.R. (radar) and of an effective command and control system for his squadrons.

Born as Hugh Caswall Tremenheere Dowding at St. Ninian's Boys' Preparatory School in Moffat, Scotland, where his father was a teacher. From 1942 onwards he developed a belief in spiritualism, theosophy, fairies and flying saucers.

In 1951 he married again (his first wife having died in 1920) to the widow of a flyer who had died in 1944 in the Battle of Britain. They met because a medium claimed to have received a message from the dead flyer suggesting that Dowding take the widow, Muriel Whiting, out to lunch. Truly, a match made in heaven. She also was a spiritualist and they were both anti-vivisectionists and vegetarians. There are some differing versions but Wikipedia says that in 1959 his wife set up the organisation Beauty without Cruelty.

Died at home in Tunbridge Wells. In the 1969 film "The Battle of Britain" he is played by Olivier.

Our photo shows an exhibit in the Ops Room museum in Uxbridge, Dowding on the right.

This section lists the memorials where the subject on this page is commemorated:
Air Chief Marshal Lord Dowding

This section lists the memorials created by the subject on this page:
Air Chief Marshal Lord Dowding

Born in Massachusetts to Irish immigrants. Aged 8 his family moved to New Ham...