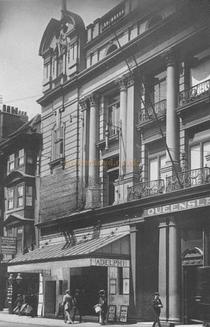 Founded as the Sans Parail by John Scott, and his daughter Jane, who was an early playwright-actor-manager. 1819 it re-opened as the Adelphi Theatre, named for the Adelphi development opposite. 1858 the theatre was rebuilt. In 1879 the Gatti brothers took it over and also, 1887, created the Adelphi Theatre Restaurant next door, to the west. 1897 one of the regular performers, William Terriss, was murdered as he entered the theatre by the Maiden Lane entrance. 1901 the theatre was rebuilt to designs of Ernest Runtz and for three years known as the Century Theatre. The theatre was rebuilt again in the 1930s and in this design the theatre, the facade at least, took over one bay of the restaurant. This is the building we see today, although the facade is now even flatter than it was in the 30s. Our picture, from the the magnificent Arthur Lloyd, shows the 1858 building.

The Gatti's set up a electricity suppy for another nearby restaurant and also used it in 1885 to provide lighting to this theatre, making the Adelphi the first London theatre to be lit with electric light, according to the ODNB.  But the Savoy Theatre, claims this crown in 1881.

The Theatres Trust have a detailed description of the various changes the theatre has been through.

This section lists the memorials created by the subject on this page:
Adelphi Theatre

FineArtAmerica have a photo.

The fourth theatre on the site since restoration times, this is the oldest th...

Richard D'Oyly Carte intended the theatre to be the home of English grand ope...