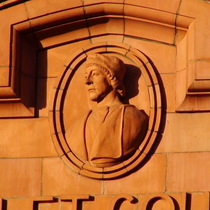 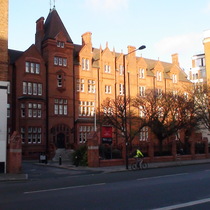 The bust is above the 1st floor windows, just distinguishable in our photo, above the large red sign. Above the entrance at the east end of the building: "St Paul's Preparatory School 1890". A difficult building to photograph, but at least we visited in winter.

This building was designed in 1890 by W. H. Spaull for St Paul's junior school. In 1968 the school moved out and Euston Films began making programmes there for Thames Television. It is now used as offices. The juniors moved at the same time and to the same site as the main school.

This section lists the subjects commemorated on the memorial on this page:
Colet - Colet Court

John Colet was the only surviving child of the 22 that his mother bore. Found...