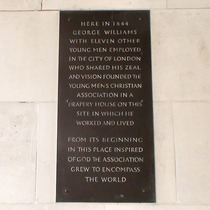 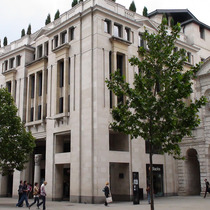 Here in 1844 George Williams with eleven other young men employed in the City of London who shared his zeal and vision founded the Young Men's Christian Association in a drapery house on this site in which he worked and lived.

From its beginning in this place inspired of God the Association grew to encompass the world.

Williams was working as a buyer at Hitchcock, Rogers & Co., a large retail drapers at 72 St Paul's Churchyard. The situation of workers in such establishments living on the premises is described in the novel "Kipps" by H. G. Wells, who based it on his own unhappy experience of the same employment in the early 1880s.
This plaque looks like it was designed for a different placement, probably an earlier building, and has been re-erected on this site. Note the stylish letters, with, for example "the" having the "t" and the "h" elided.

The two plaques face each other, on the inside walls of the arcade. The Castle Baynard tree is the one to the right in the photo.

2019: A London Inheritance has a post about the building that was on this site up until WW2, the offices, factory and warehouses of Hitchcock, Williams & Co.. The firm moved into number 72 sometime after 1853 and then expanded to take in many of the surrounding buildings. The buildings were destroyed by bombs on 29 December 1940.

This section lists the subjects commemorated on the memorial on this page:
YMCA

This section lists the other memorials at the same location as the memorial on this page:
YMCA

Planted by the Chairman of the Castle Baynard Ward Club, Professor Anthony Tr...

Corporation of the City of London Near this site the Grand Lodge of English ...

Site of St Thomas the Apostle church, destroyed in the Great Fire 1666. Corpo...

Campden Hill Square was laid out by Joshua Flesher Hanson in 1826. Gates and ...