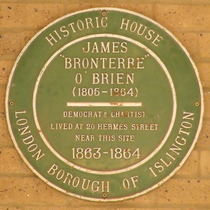 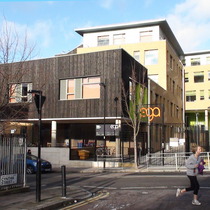 We originally photo’ed this plaque in 2009 on the previous building at this site.  In September 2013 Rocker Ages sent this link showing the plaque abandoned.  We contacted the school who told us it would be re-erected in early December 2013, and so it was.  It’s on the brick wall between the pillar and the black and white ‘EGA’ sign in our photo.  From the close-up photo one can see that the plaque has been through troubled times.  But we are grateful that it has returned at all.

This section lists the subjects commemorated on the memorial on this page:
James "Bronterre" O'Brien

This section lists the subjects who helped to create/erect the memorial on this page:
James "Bronterre" O'Brien

That shape at the top of the stone (filled in with cement, we think) would ha...