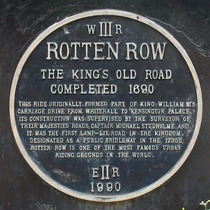 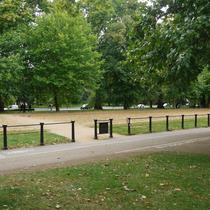 WIIIR
Rotten Row - the king's old road, completed 1690. This ride originally formed part of King William III's carriage drive from Whitehall to Kensington Palace, its construction was supervised by the Surveyor of Their Majesties Roads, Captain Michael Studholme, and it was the first lamp-lit road in the kingdom. Designated as a public bridleway in the 1730s, Rotten Row is one of the most famous urban riding grounds in the world.
EIIR, 1990.

This section lists the subjects commemorated on the memorial on this page:
Rotten Row

Major road in London, running from Parliament Square to Trafalgar Square. The...

This tree was planted by Frank Lerner on 8th October 2011 to mark Victory in ...