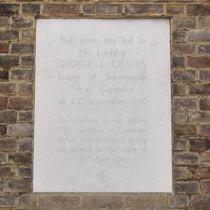 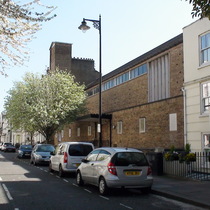 This stone was laid by His Lordship George L. Craven, Bishop of Sebastopolis, Vicar Capitular, on 22nd September 1956. The previous church of the Holy Apostles in Claverton Street was destroyed during an air-raid on the night of 16th April 1941.

The plaque is masquerading as the the last window on the right.

From the church's website: "The first Catholic church in Pimlico was in Claverton Street {a few streets to the south-east}, a former Methodist chapel which was converted into a Catholic church and dedicated to the Holy Apostles in 1917. This was not a parish church but a chapel-of-ease served by the priests of Westminster Cathedral." The church was made unusable by the 1941 bomb and the congregation survived without a church using other buildings until November 1945 when they could hold their services "in a pre-fab built on the site of the old church in Claverton Street." At the end of the war, with demand for housing "the site of the old church was requisitioned as part of the project to build the Churchill Gardens Estate."

Eventually a new site was found by the priest of the church, "Fr. Hadfield was the son of an architect and used his father’s Sheffield firm to build the new presbytery and church. That was done through the generosity and enormous sacrifice of the parishioners, but the new church was formally opened by Cardinal Godfrey on 1 December 1957."

More information in the Westminster Cathedral magazine, June 2018 and at Taking Stock.

This section lists the subjects commemorated on the memorial on this page:
Holy Apostles Church - Pimlico

This section lists the subjects who helped to create/erect the memorial on this page:
Holy Apostles Church - Pimlico

This photo shows the plaque post-restoration, after its unveiling in 2015. Fo...

The plaque contains an error - the theatre was actually the Princess Theatre ...