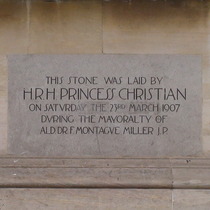 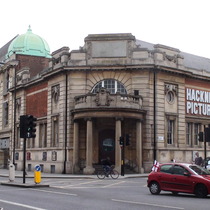 This stone was laid by HRH Princess Christian on Saturday the 23rd March 1907 during the Mayoralty of Ald. Dr. F. Montague Miller JP.

The Hackney Central Library was opened  in 1908. It shut in the 1990s and in 1999 a new library opened on the other side of Mare Street in Town Hall Square. In 2000 the old Library building was refurbished as the Ocean music venue and then in about 2011 it became the Hackney Picturehouse cinema.

This old Central Library building is often confused with the Hackney Methodist Central Hall which is the next door building to the north, opened 1925.

If you are interested in the stone used to face this building see Building London.

This section lists the subjects who helped to create/erect the memorial on this page:
Hackney Central Hall and Library - foundation

This plaque was unveiled on the centenary of his death.