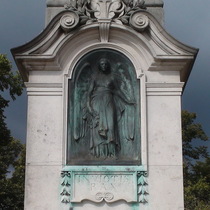 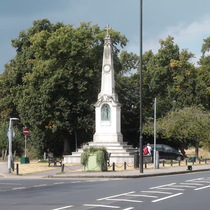 {On the main face, south-east, below the angel, and then anti-clockwise:}
Invictus Pax

{north-east:}
In the sight of the unwise they seemed to die yet is their hope full of immortality

In honoured memory of the civilians of Wimbledon who lost their lives in the Second World War, 1939 - 1945, and those killed in other conflicts.

{north-west, within a moulded frame:}
In honoured memory of the men of Wimbledon who gave their lives for their king and country in the Great War 1914-1918.

{south-west:}
All these were honoured in their generation & were the glory of their time.

In honoured memory of the men and women of Wimbledon who gave their lives serving in His Majesty's forces during the Second World War, 1939 - 1945, and those killed in other conflicts.

The first quote comes from the ancient Greek writer Hermes Trismegistus; the second from Ecclesiastes 44:7.

This monument is a good example of how WW1 monuments were, with very minor modifications, used to commemorate WW2. In this case just the addition of two sentences referring to "serving" men and women and "civilians". And then later these two sentences were extended to refer to "other conflicts". A catch-all that leaves an image of the bureaucrats of the time thinking "Right, that should be the last time we need to bother about that memorial, come what may."

This section lists the subjects commemorated on the memorial on this page:
Wimbledon war memorial