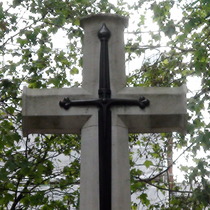 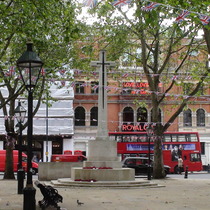 {On the next lower section of the plinth:}
Their lives for their country, their souls to their God.

From the typefaces one can tell that the two inscriptions were done at different times, and the WW2 dates don't look squeezed in.  From these two clues we deduce that the upper inscription was erased and re-done after WW2 and we suspect that the "and women" was added then.  It's interesting that the '1900' part of the dates is written differently for the two wars, 'MDCCCC' for WW1 and 'MCM' for WW2.  Our Latin consultant, David Hopkins, neatly calls the the latter, the 'compact notation'.

David says "'Invictis pax' here probably means 'Peace to those who cannot be conquered' – presumably because they are now in heaven and out of harm’s way.  Not the logic that I would use in this situation!  I’m wondering if a poem, 'Invictus'(= unconquered), written long before WW1 that includes the line “for my unconquerable soul” might have been an influence.  I’ve also found this grave stone with the same wording: 'Their lives to their country, their souls to their God', again from WW1."

Believed to be the first war memorial erected on a public highway. At first sight just a simple stone cross on a plinth, but the whole base is octagonal and has many parts: 3 steps, 3 sections to the plinth and then the lower part of the cross has 3 subsidiary plinth-like sections. This simple monument, like many WW1 memorials, has been designed with care and style.

This memorial is a Cross of Sacrifice, originally designed to stand in Imperial War Grave Commission cemeteries abroad, or in cemeteries at home with more than forty British military burials (e.g. Queen's Road Cemetery Croydon). Blomfield designed it in a variety of sizes. We thank Duncan Youel for providing much of this information.

The VC plaques are arranged on the ground in a checkerboard pattern: reading left-right, down: Davies, Gribble, Cartwright, Boarke, Crutchley.

This section lists the subjects commemorated on the memorial on this page:
Chelsea war monument

men and women of Chelsea who died WW1 & WW2

This section lists the subjects who helped to create/erect the memorial on this page:
Chelsea war monument

This section lists the other memorials at the same location as the memorial on this page:
Chelsea war monument

{Beneath a representation of the Victoria Cross medal:} Private George Cartwr...

{Beneath a representation of the Victoria Cross medal:} Lieutenant Victor Cru...