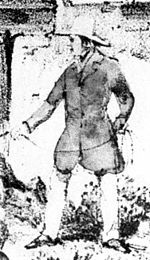 Artist, architect and explorer. Born at 21 Charles Square. Topographical artist. He visited many Mediterranean countries drawing their monuments and ruins. In 1839-40 Catherwood and John Lloyd Stephens visited Central America to record the ruins there. They are credited with the rediscovery of the Maya civilization.

His reaction to the California Gold Rush proves him no fool. He moved to San Francisco, not to mine for gold himself, but to sell supplies to the miners. Died crossing the Atlantic from Liverpool to New York when his steam ship collided with another.

Wikipedia think the image is probably a Catherwood self-portrait.

This section lists the memorials where the subject on this page is commemorated:
Frederick Catherwood

{On the tile at the top right of the scene:} Frederick Catherwood, architect ...