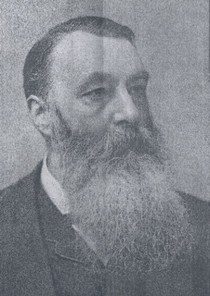 Architect. Designed the German Gymnasium at King's Cross, 1864-5. Son-in-law of Dr Louis Cappel, the pastor of St George in the East, Cannon Street Road, E1. When the associated school (established 1765) needed a new building Gruning was given the job and it opened in 1877.

Andrew Behan has researched Gruning: Edward Augustus Gruning was born on 26 June 1837 in Stoke Newington, the youngest son and the sixth of the seven children of John Frederick and Henrietta Elizabeth Gruning. Both his parents were born in Germany, his father in Holstein and his mother in Hamburg, but who had come to England and had been naturalised as British Subjects. His father was a general merchant. He was baptised on 5 August 1837 at St Mary's Church, Stoke Newington and the 1841 census shows the family living in Stoke Newington High Street.

He served his articles in the office of Thomas Leverton Donaldson from 1853 to 1858 and commenced practice on his account in London in 1862. On 31 January 1858 he applied for admission to the Freedom of the City of London, by redemption, in the Company of Goldsmiths and was sworn in on 5 January 1859 taking the Oath of Allegiance on 9 February 1859. The 1865 Post Office London Directory lists him as an architect & surveyor at 25 Old Broad Street, London, but by 1870 he had moved into premises in Gresham House, 24 Old Broad Street. The 1871 census shows him living at 40 Highbury Grove, Highbury, with an elder brother, Frederick Gruning, who is recorded as being both an imbecile and dumb from birth. Edward Gruning's occupation was given as an architect and also residing at the property was an attendant for his brother, a butler, a gardener, a cook, two housemaids and a kitchen maid.

On 18 June 1873 he married Annie Augusta Cappel in St George's German Lutheran Church, Battersea and they had three children, Beatrice Louise Gruning (1877-1937), Ella Theresa Gruning (1879-1927) and Edward Louis Gruning (1882-1957). The 1881 census shows him as an architect living at 43 Hamilton Terrace, Marylebone, with his wife, two young daughters, a nurse, a nursemaid, a cook, a parlourmaid and a housemaid. The 1891 census records the family at Westgate-on-Sea, Margate, Kent. Electoral registers form 1898 show him living at 3 Holland Park, Kensington.

This section lists the memorials where the subject on this page is commemorated:
Edward A. Gruning

Engineer and builder. One of the early innovators with reinforced concrete in...