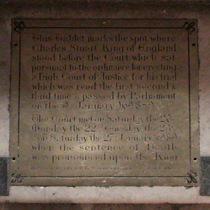 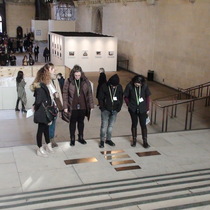 This tablet marks the spot where Charles Stuart King of England stood before the Court which sat pursuant to the ordinance for erecting a High Court of Justice for his trial which was read the first, second & third time & passed by Parliament on the 4th January 1648-9.

From Notes & Queries 1920 "The trial of the King was, by order of the Court, held where the Courts of King's Bench and Chancery sat in Westminster Hall, and this Tablet marks the position of the Bar that separated those Courts from the length of the Hall."

The last line of the plaque is illegible and we think the only way of reading it would be a spot of brass rubbing. Another visit required, when we may discover the limits of the security in the Palace.

This section lists the subjects commemorated on the memorial on this page:
Westminster Hall - Charles I

This section lists the other memorials at the same location as the memorial on this page:
Westminster Hall - Charles I

{Top plaque:} Near this spot, at the Kings Bench at the South end of the Hall...

Williams was working as a buyer at Hitchcock, Rogers &amp; Co., a large retai...