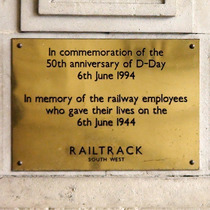 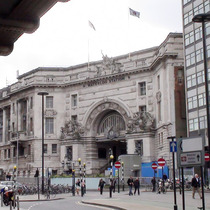 In commemoration of the 50th anniversary of D-Day, 6th June 1994.
In memory of the railway employees who gave their lives on the 6th June 1944.
Railtrack South West

Constructed 1907-22. The long station front was designed in phases by James Robb Scott. Only the Victory Arch is listed.  At one time this building must have looked quite good, but now the ghastly surroundings have pretty well defeated it.   View from the Mirror has an excellent post on the creation of Waterloo station as a more central terminus, an extension from Nine Elms, and another, more about this Victory Arch.

Bonus fact:  Waterloo Station is named after the bridge, which was opened in 1817, 2 years after the battle.

This section lists the subjects commemorated on the memorial on this page:
Waterloo D-Day 50th anniversary

This section lists the subjects who helped to create/erect the memorial on this page:
Waterloo D-Day 50th anniversary

This section lists the other memorials at the same location as the memorial on this page:
Waterloo D-Day 50th anniversary

The Tom Ossel Memorial GardenThis garden of peace is dedicated to the memory ...

OranjehavenThis building served as a club endowed in 1942 by Her Majesty Quee...