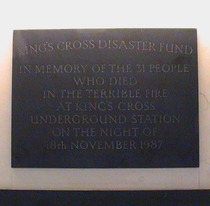 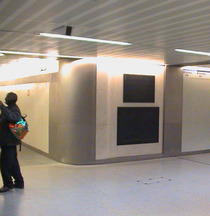 {On the top plaque:}
King's Cross Disaster Fund
In memory of the 31 people who died in the terrible fire at King's Cross underground station on the night of 18th November 1987.

{On the lower plaque: a list of 30 names in alphabetical sequence, followed by:}
An unidentified man
Later identified as Alexander Williamson Fallon

{For the full list of names see Subjects commemorated.}

Below ground, at the north end of the tunnel under the Euston Road.

This section lists the subjects commemorated on the memorial on this page:
King's Cross fire - names

B.A. (Hons) is a university degree. Andrew Kevin Burdett was born on 12 Decem...

This section lists the subjects who helped to create/erect the memorial on this page:
King's Cross fire - names

Unveiled to commemorate the 150th anniversary of Gissing's birth.