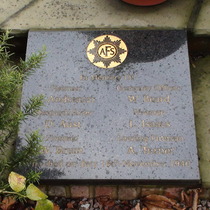 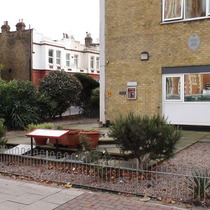 The report in the glazed stand contain this text:
The memorial stones outside this station were placed here by the Wandsworth Fire Service Old Comrades Association in commemoration of their colleagues who have been killed whilst on duty. Six wartime fire-fighters were killed when the old Wandsworth Fire Station was destroyed by enemy action during the Second World War.  The incident occurred on the night of 16th November 1940 during a heavy air raid. Both appliances, pump-escape and pump, were in the station awaiting deployment and their crews were resting, mainly in the basement of the building.  Also in the basement was the Control Room staffed largely by female personnel, and other off-duty and administrative staff were sleeping in various positions offering shelter.
On the ground floor, the Station Watch-Room was manned by Watch-Room Attendants W. Brum and L. Isaacs.  Also present with them was Company Officer Beard who had just returned from visiting local Sub-Stations.
On the other side of the Appliance Room was the Recreation Room and here were resting Firemen A. Turner and L. Aylett; Leading Fireman Despatch Rider C. Andreazzi and Junior Despatch Riders D. Aust and E. Bowler.
The station was hit by an oil-bomb and was immediately well alight.  The Recreation Room side collapsed completely but the only personnel on this side of the building were the five men referred to.  Of these, Fireman Turner, Ldg Fm D/R Andreazzi and Junior D/R Aust were killed if not by the explosion then by falling masonry.  Fm Aylett and Junior D/R Bowler were shielded by the snooker table under which they were sleeping.  This partially collapsed but the strong legs and slate top, although broken, protected them from the debris and despite being trapped they sustained comparatively minor injuries.  Meanwhile in the Watch Room, the two W/A’s and Coy Off Beard were killed, probably by the explosion, and that part of the station and the appliances were burning.
The personnel in the basement were able to escape into the station yard through a hatchway constructed for such a purpose.  Assistance was quickly forthcoming as pumps from Battersea were already on their way to stand-by at Wandsworth when the incident took place.  They got to work on the fire and rescue operations commenced as soon as it was known that there were survivors in the debris.  The first man to be reached was Fm Aylett, and when extricated he was able to tell the location of each of the other men in the Recreation Room.  D.R Bowler was next released and both were removed to hospital.
In due course, six bodies were recovered from the building.  The area where the memorial fountain now stands is actually the site of the Watch Room of the old station.

This section lists the subjects commemorated on the memorial on this page:
Wandsworth Fire Station - stone plaque 1

There are conflicting records as to this fireman's middle name, i.e. Roberto,...

This section lists the subjects who helped to create/erect the memorial on this page:
Wandsworth Fire Station - stone plaque 1

This section lists the other memorials at the same location as the memorial on this page:
Wandsworth Fire Station - stone plaque 1

Rose bushes are planted in garden area behind this plaque.

This foundation stone was laid by the Right Honourable and Right Reverend Art...

At some point between the 60s and 80s the memorial was moved to the company's...