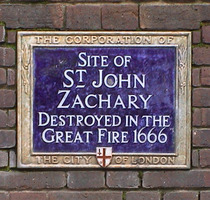 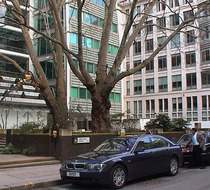 The Corporation of the City of London
Site of St John Zachary. Destroyed in the Great Fire 1666.

In the picture the plaque can just be seen between the two cars. To the left you can just make out a very decorative metal arch over the entrance with some stunning golden leopard faces. There are more of these faces elsewhere in this little garden all possibly reclaimed from the Goldsmiths' Hall.

At London Garden Trust we find "Goldsmiths' Company St John Zachary Garden. (0.04km). The garden is on the site of the former churchyard and church of St John Zachary, which was partly destroyed in the Great Fire. In 1339, The Worshipful Company of Goldsmiths had acquired land here and built the earliest recorded livery hall on this site. Following the destruction of part of the Company's property during WW2, in 1941, firewatchers laid out the first Goldsmiths' garden, which won Best Garden on a Blitzed Site in 1950. Anne Jennings redesigned the garden in 1995/96. The present multi-level garden includes mature trees, benches, lawn and a fountain. It relates well to the contemporary architecture of the adjoining Lloyds TSB building, which features box topiary on its terraces."

This section lists the subjects commemorated on the memorial on this page:
St John Zachary

This section lists the subjects who helped to create/erect the memorial on this page:
St John Zachary

The Corporation of the City of LondonSite of the French Protestant Church, de...