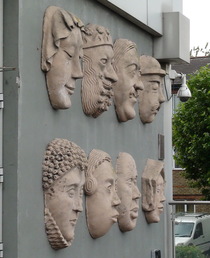 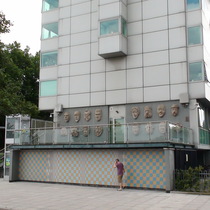 Bust: Wall of the Ancestors - rightmost

Site: Wall of the Ancestors (3 memorials)

This tower was erected in the 1960s/70s as part of the Pepys Estate.

From the platform one could get some good pictures of these 16 heads, but the platform is inaccessible; you can go up the steps at the left but no further, hence our rather unsatisfactory photographs.

We believe each plaque is attempting to identify the 8 characters nearest to it, left to right, top row first, then bottom row, but that there has been some confusion. Taking the plaques at face value (ha, ha): Phineas Pett, a 17th century shipwright is wearing a crown; the Tsar is looking rather humdrum and 20th century; Metrine (a girl's name currently popular in the black community) seems to be wearing a medieval headdress, as does Debra Lee.

The faces were probably correctly identified when first erected but the building and this artwork have been "renewed" and in the process we think the heads suffered a random shuffle.

The block was erected in 1964 as social housing. The Wall of the Ancestors was added in 1997. In 2002-6 the Tower was renovated, reclad, extended upwards and sold as private flats. As part of this work the heads were reconfigured and new plaques provided. We've also read that the heads were recast at this time. See the original arrangement here. The heads are made of cream cast stone and each is about a metre high.

More information at Walking the Wall of Ancestors and Wall of the Ancestors, Deptford Strand.

This section lists the subjects commemorated on the memorial on this page:
Wall of the Ancestors - rightmost

This section lists the subjects who helped to create/erect the memorial on this page:
Wall of the Ancestors - rightmost

This section lists the other memorials at the same location as the memorial on this page:
Wall of the Ancestors - rightmost