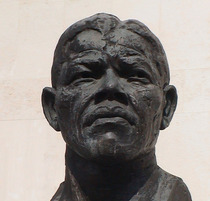 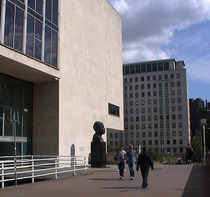 ‘The struggle is my life'
Nelson Mandela
Gaoled 5th August 1962, sentenced to life imprisonment 12th June 1964 for his actions against apartheid.
Erected by the Greater London Council.
Unveiled by Oliver Tambo, President of the African National Congress, 28th October 1985.
Nelson Mandela was released after 27 years' imprisonment, 11th February 1990.
Awarded the Nobel Peace Prize, 10th December 1993.
Inaugurated President of the Republic of South Africa and its Government of National Unity, 10th May 1994.
{On the back:}
Sculptor - Ian Walters

Its black polished-granite plinth was raised two feet for greater security after the original sculpture was destroyed. The original was offered to the Greater London Council in 1984 and unveiled a year later by the late ANC president Oliver Tambo while Mandela was still in jail. The day after the unveiling Labour Party firebrand and anti-apartheid activist Tony Brand stood up in the House of Commons, complete with ANC T-shirt and goaded the then British Prime Minister Margaret Thatcher. Would she find time, he asked, "to go to the South Bank to see the statue of Nelson Mandela erected by the GLC?" She replied with a terse "No". The sculpture lasted just over a year before being destroyed by fire, the last in a series of attacks by racist gangs who left a wall daubed with slogans such as "black murderers out of Britain".

Unusually this was erected while Mandela was still alive.  There are a few such statues in London and we are collecting the list at FennerBrockway.

This bust is on the upper level beside the Royal Festival Hall.

This section lists the subjects commemorated on the memorial on this page:
Nelson Mandela - bust

This section lists the subjects who helped to create/erect the memorial on this page:
Nelson Mandela - bust

Born Mbizana, in what is now Eastern Cape. President of the African Nationa...

{On a small brass plaque attached to the plinth:}Hill