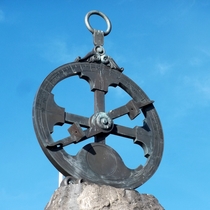 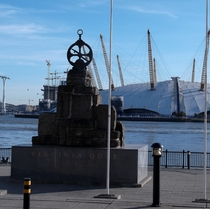 {Inscription, repeated on both sides of the marble base of the monument:}

Virginia Quay
The Virginia Settlers Memorial tablet was unveiled in 1928 on the wall of Brunswick House which formerly stood about 100 yards to the west of this point. In 1999 Barratt Homes Limited reinstated this monument and commissioned the mariner’s astrolabe by Wendy Taylor C.B.E.

{On the plaque facing the river, beneath a depiction of three ships and a banner with the inscription 'Dei Gratia Virginia Condita' (By the grace of God, Virginia was founded) :}

From near this spot, December 19 1606, sailed with 105 “adventurers”:
The “Susan Constant” 100 tons. Capt. Christopher Newport in supreme command;
The “Godspeed” 40 tons. Capt. Bartholomew Gosnold;
The “Discovery” 20 tons. Capt. John Ratcliffe.
Landed at Cape Henry, Virginia April 26 1607.
Arrived at Jamestown Virginia May 13 1607 where these “adventurers” founded the first permanent English colony in America under the leadership of the intrepid Capt. John Smith, Edward Maria Wingfield President of the Council, the Reverend Robert Hunt and others.
At Jamestown July 30 1619, was convened the first representative assembly in America.
Erected by the Association for the Preservation of Virginia Antiquities in 1928 in commemoration.

This voyage took place 16 years before the Mayflower.

The memorial has a history of its own. British History Online (text and plan) and this 1893-6 map confirm that in 1928, when the wharf was known as Brunswick Wharf, a plaque was erected on the westernmost pier of Brunswick Buildings (formerly the Railway Tavern). The Guardian says this building was, at this time, the Dockmaster's House. Stand at the memorial and look east; the building you see is standing about where the Railway Tavern stood. In 1947, following Blitz damage, that was demolished and the quay modified.

The plaque was kept to form part of a large monument, erected by the Port of London Authority, in the form of a pile of stones from the old quay, with a bronze mermaid on top. Harold Brown designed the whole monument and the mermaid. We thank Jamie Davis for finding this link to the British Pathe news film of the unveiling in 1951.

But this monument was left neglected and vandalised and the mermaid stolen. Images at Tower-Bridge.org show that the plaque was also removed but that must either have been retrieved; or removed before the vandals came back for it; or perhaps the current plaque is a reproduction.

Then, as part of their redevelopment of this area for housing, Barratt Homes Limited reinstated this monument, in a slightly different place, and commissioned the mariner’s astrolabe by Wendy Taylor. Unveiled 23 September 1999.

The mermaid was discovered being auctioned in 2007, having been bought from a man in Hatfield Heath in about 1992. But its reappearance was too late for the monument and Barratts showed no interest in acquiring it. The auction description was "Lot 413: Harold Brown: a bronze figure of a mermaid, modelled in high relief with long flowing hair and curling tail on wave-cast base signed Harold Brown, 1950, Weathered green patination, 180 cm.; 71 ins. high."

2018: Matt Hogendobler kindly corrected our inept Latin translation. And Paul Dyer provided this link to a photo of Brunswick Wharf in 1920.

This section lists the subjects commemorated on the memorial on this page:
Virginia Settlers Memorial

Vicar. Born circa 1568. He was chaplain to the Jamestown Settlement.

Mariner and colonist. His family name appears to have originally been Sicklem...

This section lists the subjects who helped to create/erect the memorial on this page:
Virginia Settlers Memorial

Association for the Preservation of Virginia Antiquities

In memory of those who lost their lives on 9 November 2016.Dane ChinneryDonal...