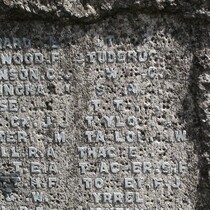 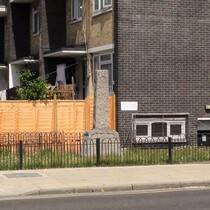 {The other three panels carry the list of probably 159 names, now largely illegible.}

The panel facing the road has no letters left at all, only the holes in which the letters were fixed but from these it is, surprisingly, possible to read the lost text. However many of the letters that make up the list of names are also lost, as you can see in our close-up photo, and names cannot be reconstructed from the dots left behind.

The IWM War Memorials Register gives "Memorial was originally situated outside St Phillips Church, which was destroyed in the Second World War. The memorial survived and was incorporated into the new Council Estate built on the site."

War memorials online gives: "Originally "a large granite cross bearing a bronze figure of Christ" was unveiled 12 March 1921 at St Philips's Church (now demolished) .What remains is rough granite column set on a rough tapering plinth with names in metal lettering (many now indistinct)." This website specifies that 159 names were on the memorial and also quotes the report in the Hackney and Kingsland Gazette 14 March 1921.This tells that the unveiling was carried out by Mrs Shaw of London Fields who had lost several brothers, belonging to the locality, in the war. The memorial was unveiled without the list of names due to lack of funding. A call was made for further subscriptions which must have been forthcoming at a later date. We wonder if the work was done rather too cheaply and that is why they names are in such a bad state now. Though our experience of memorials is that this type of lettering often fares badly, possibly being prey to lead thieves.

The church was founded in 1841 and was out of use by 1952. In this 1895 map you can see that it was set back from both Parkholme Road and Richmond Road, with a curved drive on Parkholme. War Memorials Online has a good photo, c.1900, we'd guess. All this suggests that the memorial is probably still exactly where it was erected.

This section lists the subjects commemorated on the memorial on this page:
WW1 memorial - Richmond Road

This section lists the subjects who helped to create/erect the memorial on this page:
WW1 memorial - Richmond Road

Men of the parish of St Philips Dalston, killed in WW1

{Incised in the marble below the medallion:}To the memory of Captain Charles ...