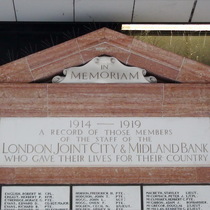 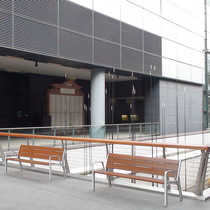 In memoriam
1914 - 1919
A record of those members of the staff of the London Joint City & Midland Bank who gave their lives for their country.
{The 14 panels below list 717 names, alphabetically with rank, see Subjects commemorated.}

Statues flank this central panel. The bases of both are inscribed: Albert Toft, Sc. 1921. One is a winged angel writing in an open book (inscribing the names of the dead), the other is a medieval armoured soldier with down-cast eyes.

The IWM War Memorials Register gives Whinney as the designer and Toft as the sculptor and describes the memorial thus: "Marble memorial with triangular pediment and names on fourteen panels below it. Bronze figures of St George on the left and the Recording Angel on the right support it." Rather than photograph and transcribe the 717 names we have copied them from the IWM website.

The IWM also have Lives of the First World War where there is information about each of the names on this list.

History HSBC has a facsimile of the 12-page booklet "Unveiling of the Memorial at the Bank, to the members of the staff who gave their lives for their country. Armistice Day, Friday 11th November, 1921, at 5.30 pm, 5 Threadneedle Street, London EC2". In this the memorial is described as being on the north side of the banking hall, just beyond the main entrance lobby. Designed by Whinney, the Bank's architect. The statues, St George on the left and the Recording Angel on the right, are by Toft. The memorial was unveiled by the Chairman of the Board, R. McKenna. The list of names is given with the rank for each one.

The WW1 memorial was originally unveiled at the Bank’s headquarters in Threadneedle Street. The London City and Midland Bank became the Midland Bank in 1923. When the Bank moved to its new Head Office to Poultry in 1930 the memorial was left behind in what was then simply the Threadneedle Street branch. The WW2 memorial was erected at the Poultry office. Then the bank became part of HSBC and the Threadneedle branch was closed in 1992 so both war memorials was moved to the HSBC HQ in Leadenhall Street. From there the memorials were relocated to Canary Wharf where we found them. The WW1 memorial was moved in 2002, and the WW2 memorial in 2010. The Headquarters of HSBC are nearby at 8 Canada Square.

This section lists the subjects commemorated on the memorial on this page:
City and Midland Bank - WW1

This section lists the subjects who helped to create/erect the memorial on this page:
City and Midland Bank - WW1

Albert Arthur Toft was born on 3 June 1862 in Handsworth, Staffordshire, the ...

This section lists the other memorials at the same location as the memorial on this page:
City and Midland Bank - WW1